Melissa Griffin has expressed herself with music since the 4th grade, when she studied piano with a teacher who had a turtle named “Yertle.” She went on to play trumpet and baritone in the school band but always had an interest in playing drums.

In 2007, the time was right and Melissa started banging on buckets and playing with shakers around the campfire of Raleigh’s Sacred Fire Community. It wasn’t long before she discovered the Raleigh Drum Circle and then the rhythms of West Africa. She’s been blessed to study with Greg Whitt, Ronnie Pulley, Bountourabi Leftwich, Khalid Saleem, Nansady Keita, and Bolokada Conde, to name a few, plus the talented instructors at the annual West African Drum and Dance Camp in the NC mountains. In May 2011 she attended classes with Mamady Keita & Famoudou Konate during the Grandmasters Tour in Atlanta, and in February 2012 the Drum Circle Facilitator’s Guild (DCFG) conference.

Melissa and her husband Tony lead the Raleigh Drum Circle, which has become a year-round weekly event. Melissa is a marketing consultant for small businesses and created our website. 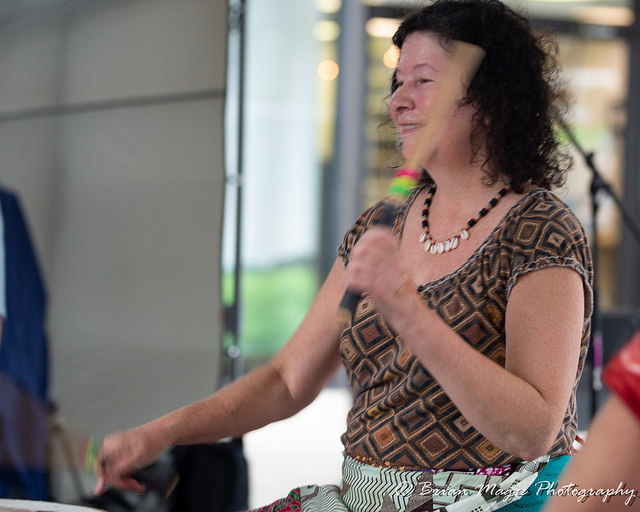 Tony Griffin has always “banged on things” (coffee cans, ottomans, dashboards, school desks, plastic buckets, etc.), but it wasn’t until 2007 that he actually bought his first drum. Never having been to a drum circle and wanting a drum of his own, he was for some reason drawn to a particular craigslist ad. It turned out that ad was posted by the founder of the Raleigh Drum Circle (RDC), Greg Whitt. A relationship was formed that changed Tony’s interests and would shape his drumming future.

Tony likes to work with his hands. By mid-2007, Tony had already taught himself how to rehead drums and took on a few such projects for the RDC as well as his own drums. In 2008, he became a board member for RDC and increased his involvement with its activities. In 2009, Tony launched a side-line business called drumsticktony.com that offers drum reheading and other drum related accessories to the Raleigh area drumming community. To date he has made/sold over 2000 drumsticks for use with African dununs, including international sales in 6 foreign countries.

In 2008, Tony helped start the Raleigh Hoop Jam, which is now the central event for the Raleigh Drum Circle. Tony has taken drum circle facilitation classes with Jim Donovan, Jana Browder and also attended DCFG Conference with Arthur Hull. In 2009, while taking over leadership of RDC, his personal focus moved to study of West African rhythms, beginning with the West African Drum and Dance Camp. It was at that drum camp that Tony would meet his mentors, Tom Harris and Robin Leftwich, accomplished drum builders and drumming instructors. His on-going study of West African rhythms is with an impressive and growing list of djembefola, including: Mamady Keita, Famoudou Konaté, Aly Camara, Fodé Lavia Camara, Bolakada Condé and Khalid Saleem to name a few. 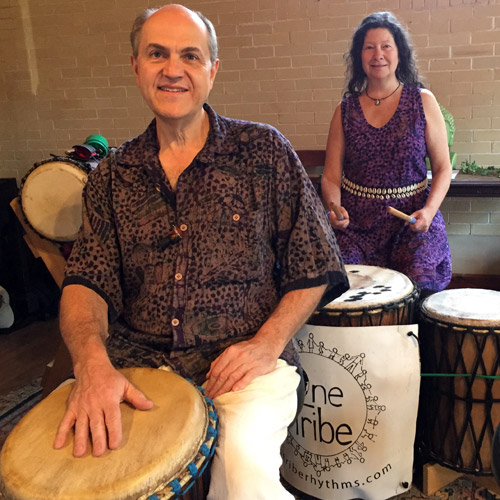 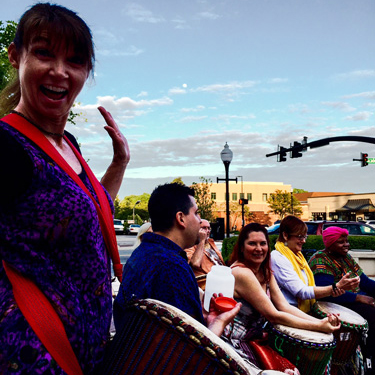 Lorrie Houze has a lifelong love of music. In 2011, she attended the Raleigh Hoop Jam at Pullen Park and fell in love with the drumming.

Lorrie works as a Physical Therapist Assistant specializing in Senior Health and Wellness. Since 2016, Lorrie has been enjoying facilitating events in Senior Living Environments in the Raleigh NC area through her business, Drumming For Your Life. 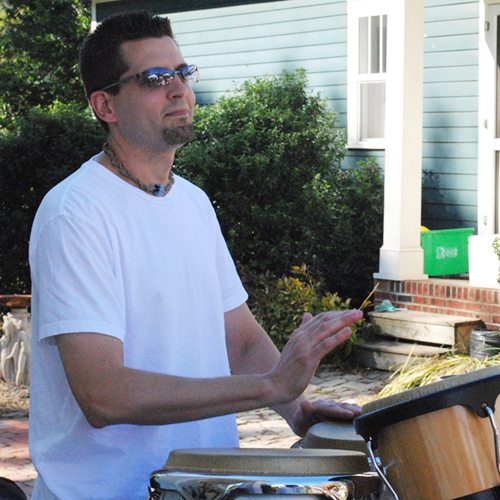 After moving from Buffalo NY in 2004, Ken has made a home in the Raleigh area. While taking some time away from playing the drums, Ken found the Raleigh Drum Circle and got the rhythym bug again at RDC events. After playing and making some connections from within the RDC, the decision to start playing and really diving into the traditional rhythms of West Africa began.

While on the adventure of looking into the roots of where the drum began, the appreciation for all styles of music was sought and incorporated in his playing as well as taking the styles of all forms of music and inter weaving them into what is heard today. From traditional West African to Congolese to remnants of Hip Hop and Fusion Jazz, every style is welcome and incorporated.

Working with everyone in the community is the highlight of this journey and makes every event special and enjoyable. Being able to share in the love of drumming and sharing the rhythms of yesterday and today has propelled Ken and One Tribe to continue to drive themselves.